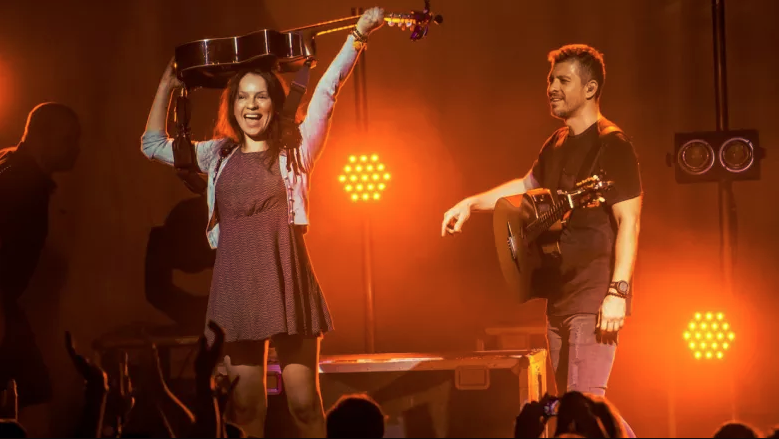 The pair has played guitar together since meeting on Mexico City’s metal scene in 1993 and still practise three or four hours daily.

So the live video cameras mounted on each guitar’s neck, a la AC/DC’s Thunderstruck clip, were a welcome window into their virtuosity.

Quintero’s right hand looked like a hummingbird’s wing-beat on the big screen. The band’s one-woman rhythm section, she played the classic flamenco triplet so fast it was a blur, using the spare milliseconds to provide a palette of percussive thumps and scrapes with her fist and fingers.

Meanwhile, Sanchez, in rock-god pose with legs four feet apart, used a fast-picking style to show off his gift for melody. The likes of Tamacun and closer The Soundmaker are tunes strong enough to linger in your brain for a lifetime, while his delicate runs on a reinvention of Dave Brubeck’s Take Five were breathtaking.

The duo’s organic guitar sounds would have been enough but they still used a range of pedals to up the entertainment value.

A distortion effect returned Rodrigo y Gabriela to their days as heavy metal musicians on covers of Metallica’s Orion and Rage Against The Machine’s Killing in the Name, the latter somehow conjuring a drone that sounded like a full string section.

It probably got the night’s biggest response but the crowd were into this all-instrumental journey the whole way. The Mexicans promised they would be back to tour their new album next year.

Knock down any wall that stands in your way of seeing them.