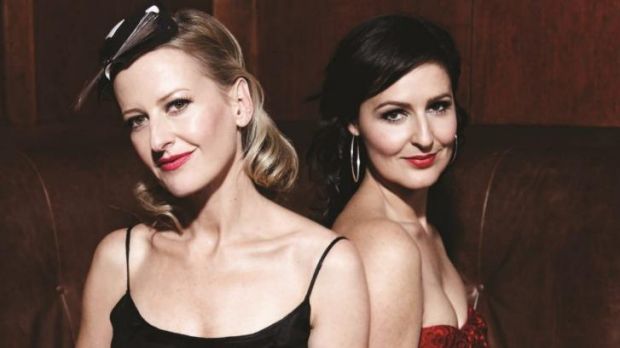 début with their classic French song collection with 6 piece band

‘With blithe spirit, old material is made new, yet again” Alistair Jones, The Australian

“Dobson and Goodridge had the seated audience eating out of the palms of their hands… and pranced off stage to the  sounds of a standing ovation” Shannon Andreucci, The Drum Media

‘Lara Goodridge and Abby Dobson combine their amazing talents in an explosion of French chic. The Jazzy, French  chanson will have you feeling like you’re sitting in a Parisian café, even if you’ve never been to France. After hearing some  of their tunes it is hard not to appreciate the talent that is Baby et Lulu” Alt Media Group, 3 ½ stars CD Review

The album was recorded live at 301 studio in Alexandria and then at Brighton Boulevard studio  by producer par excellence, Tony Buchen (Tim Finn, Blue King Brown, Washington) – and  features an eclectic mix of classics and contemporary numbers written by some of the 20th century’s greatest French songwriters.

From romantic songs about strolling along the Champs Élysées and a much loved Cole Porter jazz  standard, to tracks made famous by cultural icons Edith Piaf, Brigitte Bardot and Françoise  Hardy – Baby et Lulu have collated here a passionate tour de force of French song. There’s even  an unexpected gift: a stunning French language rendition of the platinum-selling, “Even When I’m  Sleeping”, originally sung by Abby herself in Leonardo’s Bride.

On the album, our gorgeous pair of bon vivants is joined by an all-star band of Sydney’s finest  musicians, including Matt Ottignon (flute, sax, clarinet), Julian Curwin (guitar), Marcello Maio (keys), Mark Harris (bass), and Hamish Stuart (drums). Lara herself plays violin, while Tony  Buchen brings his passion for vintage equipment and recording techniques to give the album’s  sound such true character – capturing and translating the aesthetics of the project perfectly.

Abby and Lara became fast friends after Lara saw Abby perform at Sydney’s Basement one  evening, was completely enamored, and offered to release Abby’s music on her new femalefocused music enterprise, Craving Records. They soon realised they shared a love of vocal  harmony and a passion for the romance and music of France. Later, they happened to be  holidaying in Paris at the same time. Once Lara had purchased a book of early 20th century French  popular songs, and the pair met to discuss the music in a Parisian café over French cigarettes and  chocolat – the rest soon became history!

Make sure you hear the romantic and enchanting beauty so well captured onstage by Baby et Lulu  and on their debut album.
Live in concert, the Baby et Lulu experience is joyous and celebratory, romantic and rollicking – full of passionate French music, rich harmonies and a stunning band of fine players. It’s a rendezvous you don’t want to miss!