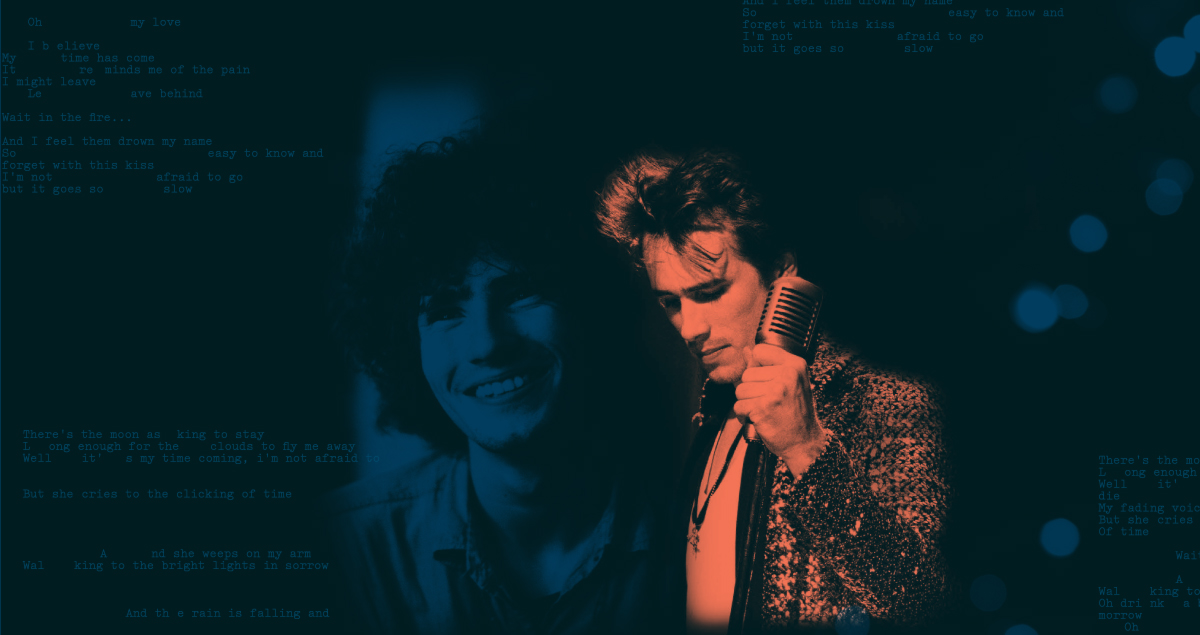 A State of Grace: The Music of Tim and Jeff Buckley:

“Jeff Buckley was a pure drop in an ocean of noise.” Bono
“Tim Buckley embodied all the virtue of grace.” Rolling Stone

Tim and Jeff Buckley’s legacy has inspired generations of musicians and listeners. The world premiere event A State of Grace celebrates their brilliant, complicated lives and music, bringing together six peerless singers — and musicians with an intimate understanding of the music of the Buckleys — teamed with images and stories. It is a moving, definitive portrait of two of the most beloved voices in rock, overseen by Gary Lucas, the legendary New York guitarist / composer who worked closely with Jeff, co-writing the immortal songs ‘Grace’ and ‘Mojo Pin’.

“The music of Jeff and Tim Buckley is timeless and gracefully transcendental,” says Gary.

Assembled to recapture the magic of Tim and Jeff Buckley’s songs are musicians with the depth, breadth and empathy to do them justice: Martha Wainwright, Casper Clausen (of Efterklang), Willy Mason, Camille O’Sullivan, Steve Kilbey (The Church) and Cold Specks, with Gary Lucas as musical director, backed by his renowned New York ensemble Gods and Monsters. Tim and Jeff’s music becomes a point of departure for an evening of soul-stirring reinterpretation and exploration in this trailblazing event.

Tickets on sale 9am Friday 5 June 2015
For more information and all ticketing information please visit astateofgracelive.com

Commissioned by Melbourne Recital Centre through the support of the Hugh Williamson Foundation Creative Production Fund.

Jeff Buckley completed only one studio album in his too-brief life, yet it made him one of the most influential musicians of the 1990s and beyond. His commanding stage presence, striking good looks and rich musical vocabulary were matched by a voice that could soar with the angels. Grace, that fragile yet ferocious miracle of an album, moved millions, earning Buckley an almost evangelical following. The ultimate musician’s musician, his fans include Paul McCartney, Jimmy Page, Chris Cornell and Thom Yorke. After Jeff’s tragic accidental death in the Mississippi River, U2’s Bono told a stadium audience, “Jeff Buckley was a pure drop in an ocean of noise.”

Jeff only met his father Tim a handful of times during his even shorter life; Tim died in 1975, aged 28. But the musical legacy Tim left behind – a wildly eclectic and brilliant collection of eight studio albums – served as Jeff’s musical touchstone. Tim also influenced his contemporaries Van Morrison, James Taylor and Leonard Cohen, and such 21st-century acts as Fleet Foxes and Beth Orton. Jeff strived for the same kind of far-reaching, liberating and often downright sexy music that Tim produced during landmark LPs Blue Afternoon and 1972’s Greetings from LA. As Rolling Stone magazine once declared: “Tim Buckley embodied all the virtue of grace.”

Described by the New Yorker as “the thinking man’s guitar hero,” Gary Lucas brings a peerless musical pedigree to State of Grace. Along with a wealth of his own solo recordings and performances, Gary has worked closely with legendary maverick Captain Beefheart, and was a key figure in Jeff Buckley’s rise. Gary and Jeff co-wrote ‘Grace’ and ‘Mojo Pin’ — songs based on Gary’s instrumentals and centrepieces of the Grace album, along with numerous other compositions, some of which will feature in State of Grace. Gary brings with him Gods and Monsters. The line-up features Ernie Brooks (ex Modern Lovers), Jason Candler (Hungry March Band), Richard Dworkin (Alex Chilton) and Jordan Shapiro, renowned for his role in Project / Object, an outfit that reinterprets the music of Frank Zappa. Gods and Monsters have rightfully been described as “an underground rock fan’s dream team”.

As part of the famous Wainwright/McGarrigle musical dynasty, Martha Wainwright was engulfed in a sea of music from childbirth. But this chanteuse has cemented her claim as a bona-fide artist in her own right, as well as contributing to albums by Kate and Anna McGarrigle and her brother Rufus, along with Teddy Thompson, Dan Bern and Snow Patrol. Martha’s incredible, evocative voice is equally suited to pop, soul, folk and torch. As Spin magazine was moved to say, “Her stage presence suggests several things at one time — defiant and strong, yet with an edge of vulnerability and sadness as well.” Martha was most recently seen in the HBO mini-series Olive Kitteridge.

Steve Kilbey, the leader of ARIA Hall of Fame inductees the Church, discovered Jeff Buckley’s music by chance. ‘’I first [over]heard Jeff Buckley at a gig,’’ Steve recalls. ‘’Someone was playing Grace and I was transfixed by the music and his voice — still has the some effect almost 20 years later.’’

Grace was also a key album for Casper Clausen, the singer for renowned Danish ensemble Efterklang, whose fourth album, 2012’s Piramida, was launched at the Sydney Opera House. “Grace is a direct channel to my teenage heart,” says Casper, “it was the soundtrack to an important time of my life, and it still is a clear projection of a feeling across time.”

New Yorker Willy Mason last visited Australia in 2012, playing dates with Mumford & Sons and Edward Sharpe and the Magnetic Zeroes. Willy’s latest album, Carry On, was given a four star rave review in The Guardian, who praised his emotional depth.

Irish-French chanteuse Camille O’Sullivan was seen here as part of the 2015 Sydney Festival. Renowned for her dark and distinctive take on the music of Nick Cave and Tom Waits, Camille will now add the songs of Jeff and Tim Buckley to her stunning repertoire.

Winner of the Sirius/XM Indie Female Artist of the Year, Somali/Canadian singer / songwriter Cold Specks has worked with everyone from Moby (‘A Case for Shame’) to Michael Gira of the Swans, on her latest album, 2014’s Neuroplasticity, a record praised by the AllMusic Guide as an “unholy union of Odetta and Tindersticks”, who also likened Cold Specks’ music to St Vincent, TV on the Radio and Macy Gray.

“The music of Jeff and Tim Buckley is timeless and gracefully transcendental,” said Gary Lucas, who sees this project as the culmination of his association with Jeff Buckley. “It lives forever in the hearts of those who have been touched by it. And it will continue to reverberate around the globe and seduce new listeners.”

In short, a State of Grace.